Guided Tour of the Church

1) The pulpit and banisters 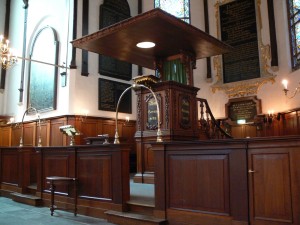 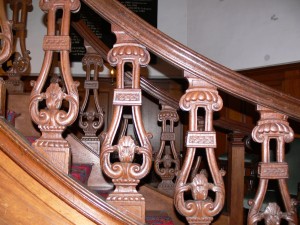 The pulpit is the centre of the church. There are no rules about where the pulpit ought to be in a protestant church, its position is chosen largely from a practical point of view. The sermon, the most important part of the worship service, must be heard by the entire congregation. Until 1734 the pulpit was fixed to the first pillar on the south side, facing across the church. However, the preacher was not easily understood from there, so it was moved to the front, to the part from where mass was said in pre-Reformation times. A new  pulpit was commissioned in Regency style. It has a sounding board to help with amplification. On the front it has a hymn board, indicating which verses of which psalms and hymns will be sung in the service, and a brass lectern on which an open bible can be found. This "Statenbijbel" is the first official translation of the Bible in Dutch, and was originally published in 1637. (Comparable to the King James Version in English.)

The lectern, in front of the pulpit, is fitted onto the altar rail. The lectern also displays an open "Statenbijbel", the bible in the first Dutch translation. In the past, the lectern was used for reading the lesson, as well as for the precentor, who helped the congregation sing.  Nowadays it is used for giving intimations prior to the service and for the bible readings during the service.

3) The altar rail and the chancel

The chancel is the area bordered by the altar rail, where the lectern and pulpit are, and where baptism is administered.  During a christening ceremony, the silver christening font is fixed to the base on the altar rail.  It was donated to the church in 1839 by Mr. and Mrs. Audié, after Mrs. Audié's baptism.  Baptism and Communion are the only sacraments recognised by the protestant church. For practical reasons Communion is celebrated in front of the altar rail, when the communion table and chairs are positioned outside the chancel. The chancel is also the area where ministers, elders and deacons are confirmed, and where the elder on duty extends the right hand of fellowship to the minister leading the service at the beginning and end of the service to signify that the church council delegates responsibility for the service to the minister, and then takes it back again. Two brass arches in the altar rail give access to the chancel.

Two rows of pews on either side of the pulpit are reserved for the elders and deacons of the church. As they are responsible for the content and orderly procedure of the service, as well as being supervisors of the congregation, they need to be positioned in a place where they have a good overview of what is happening.

5) Lists of Ministers who served this church

In the consistory room, to the south of the chancel, you will find the portraits of the ministers who served in Delfshaven. On the boards in the church they are only named, in chronological order from 1574 onwards.  The consistory room is a private space, deemed more suitable for portraits than the public worship space of the church itself, where the protestant tradition would not encourage honouring individual persons. The lists of names, however, fulfill the exhortation in Hebrews 13:7 -- Remember your leaders, who spoke the word of God to you. These plaques can also be seen as a symbol of gratitude for so many centuries of freedom to preach the Word.

6) Pews for the congregation

Before the Reformation in Roman Catholic services people either stood or knelt, there were no seats. Because in protestant services there is such emphasis on the preaching of the Word, which could take quite a long time, seating arrangements became necessary. During the early years of the Reformation people would sit on the floor around the pulpit, later some brought their own stools. The consistory members would sit in the chancel area, and the wordly leaders had high enclosed benches at the back of the church. An old plan of the church from 1728 shows these pews situated on the north side of the church.  During the course of time more and more seats were added in churches, and after a remodelling of the church in Delfshaven in 1761 it was decided to add 300 new chairs by New Year's Day 1763, and a further 30 chairs were ordered later.  As was the custom, chairs could be hired,  so one had one's own place in church. According to a document from 1925 confirmed members of the church had priority when renting seats over merely christened members and others.  One applied for a seat with the church council, if two people applied for the same period/place precedence was given to the older applicant. This system of renting seats was abandoned in the 1940s. This also was the end of the practice where guests and newcomers could only take a seat when the light above the pulpit went on.  The church currently has around 350 chairs, of which 200 in the main section, and 150 to the sides.  In the past men and women did not sit together. There were also separate places for orphans and those who received financial support from the church. The wooden folding chairs and the draught-excluding high pews at the back of the church were taken away in the refurbishing of the church in 1993, and replaced by the current more comfortable stacking chairs that can be taken out or rearranged for different purposes. The elite pews were taken out in 1796 by order of the first mayor of the independent Delfshaven, Jan Kruyff. These benches for distinguished people were not in keeping of the spirit of the times, when equality became the norm.

Taking up the offering during the service is one of the tasks of the deacons. To the right and left of the door at the back of the chancel there are traditional long handled offering bags, still in use when there are not so many people in church. Using them requires quite some skill! Between 1873 and 1954 there was a third collection during the service especially for the orphanage on the Voorhaven.  One of the church members, one C. L. van Straal, had made this a condition when he donated several buildings to the church. When, in the 1950s, the orphanage was no longer used as such, the church council decided to give up the third collection. The governors of the orphanage were not well pleased, and a court case ensued. The judge ruled the church was entitled to their decision…

On September 25, 1774 the church celebrated 200 years of Reformed Teachers. The commemoration plaque 200 years Reformed Church Delfshaven commemorates this. The lower plaque has a time poem in which a date is hidden. The capital letters represent roman numerals. Adding these numerals one gets 1761, the year of the reconstruction of the building.

On either side of the chancel are large wooden panels which take a prominent place in the church. Such panels can be seen as the protestant answer to Roman Catholic statues and crosses. To the left you will see the Ten Commandments, and to the right the Twelve Articles of Faith.  The Ten Commandments, as given to the people of Israel, have special meaning to protestants in that the Law teaches  believers they are sinful and need salvation through Christ. The Law, however, has been fulfilled through the death and resurrection of Christ.