Walking along the Aelbrechtskolk you would almost miss it. It doesn’t stand out among the (ware)houses. Only from the other side of the canal does the Old or Pilgrimfathers’ Church really strike you with its characteristic façade and little belfry. But you see all the more when you enter the church. The building is “oriented”, meaning the chancel lies to the East. 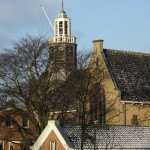 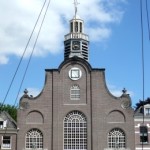 In Roman Catholic times this was where the altar was situated, now you will find the pulpit there. The building is shaped like a latin cross. The façade, in Regency-style, is rare for The Netherlands, only the church in Westzaan, built in 1740, has a similar façade. The eaves taper to a half-circle. In the middle of this half-circle you can still see the arms of Delfshaven. The façade features a large and a smaller rounded window in the middle, and a sundial above them. There are large windows above the main entrances too. Although the neighbouring village of Schoonderloo had a parish church, the rising standard of living and increasing population of Delfshaven prompted the building of a chapel of their own in 1416. Count William of Holland, son of Aelbrecht, granted permission. The newly built chapel was dedicated to St Mary and St Anthony. The building was finished in 1417.
A large bell was cast in 1464 by the brothers Hoerken (diameter: 1.02 metres, height 1.12 metres) and hung in a bell-tower.
The oldest known image of the church dates from 1512, on a map of the three “Schieën” (Schie is the name of several waterways in the area). This map shows the front of the church with a rectangular annexe. The bell-tower (house) is positioned to the North of the church.
A print from 1667 shows the bell-tower to the right, to the South of the church. Two other small dwellings occupy the space between the church and the bell-tower.
An accounts ledger covering the years 1529/1530-1551/1552 gives an interesting overview of maintenance work done in this period. The church floor was brought up to level with three ship-loads of sand, after which stonemasons laid the floor. In 1546 there was a renovation of the chancel at the East end of the church.

PLANS FOR RENOVATION IN 1728

The church was originally a low building, which was very unpractical. In the 18th century this became a problem, as especially in winter it could be very cramped and stuffy. Many a church member had to be carried out of the service after fainting, mostly due to the little coal footstoves people used to keep warm, as of course there was no heating in those days. Church members would place their feet on little wooden boxes containing an earthenware bowl, a firepan, in which glowing coals were kept. However, in the low building the exhaust fumes combined with the humidity from damp or wet clothing often made people unwell. To improve fresh air circulation in 1728 plans were made to extend the wall three metres out onto the North side of the church. These plans were not carried out, but because we have the drawings, we know what the church looked like in those days. The main entrance was in the middle of the façade. The pulpit hung from the first pillar on the South side. The altar rail went round the pulpit. Straight opposite the pulpit was the pew for the most notable members from the ruling classes, and to the South of the chancel area a door led to a tiny storage space for use of the the verger, now the consistory room.

In 1732 the city council of Delft examined the state of the church building. Their verdict was that it was not really necessary to re-build the church completely, only the pillar from which the pulpit was suspended and the pillar directly opposite needed to be replaced. Also, they suggested moving the pulpit to the chancel, creating more seating space in the church. Thus, in 1733-1734 a renovation ensued. Two new pillars were built, and the façade was renewed.
As complaints about the lack of fresh air continued, it was decided in 1760 to do more substantial work on the building. The roof was lifted by about 3.6 metres. The church started to look like the building we know today. This work was started April 1, 1761, and was completed five months later. The congregation met in one of the warehouses during this time. Funds were borrowed to pay for the work.
There was no money left for a bell tower. The little cupola-shaped belfry was added in 1761 at the cost of the Delft city council. The mayor and wealthy rulers paid for it as they thought it would greatly enhance not only the appearance of the church but all of Delfshaven. The old large bell was hung in the new cupola, and made the old bell-tower next to the church superfluous. 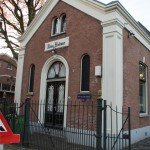 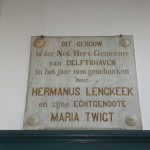 A legacy paid for the church hall built in 1890 behind the church, with its inscription of 'Eben Haëzer’, Ebenezer. (Eben ha-Ezer is Hebrew for 'the stone of help', see 1 Sam 7:12). The building was donated by Hermanus Lengkeek, elder of the church, and his wife Maria Twigt, whose names can be found on a memorial plaque in the building. This hall was restored and renovated in 1994. A year later the “Pilgrim Presentation”, our permanent exhibition on the Pilgrim Fathers was opened here.

Delfshaven was regularly flooded, and it was not unknown for the water to rise to about 60 cm. inside the church. This caused subsidence of the floor and pillars, necessitating a major restoration in 1937.
Central heating replaced the coal heaters. Instead of the windows with wooden grooves new stained glass windows were installed to the side. The two front pillars were so badly damaged they could not be saved, and thus old round ones were replaced by the square sandstone pillars you see today. The other pillars that had collapsed were straightened. Oak wainscotting was added to the chancel. 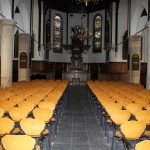 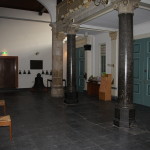 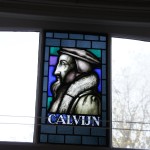 At the end of the 1980s the church looked neglected and, yet again, major work was needed.
The reformed congregation, who owned the building, was suffering from lower attendance and dwindling funds. Faced with increasing problems, contact was made with Stichting Oude Hollandse Kerken (Foundation of Old Dutch Churches). This foundation took over ownership, maintenance and exploitation of the building in 1992 and started restoration an renovations. Subsidies were granted of 1 million guilders, the total costs were estimated at 3 million. Plans were drafted by specialised historical architect Laurens Vis from The Hague.
Apart from restoration work new renovations were needed to enable multifunctional use of the premises. The pews in the middle of the church were replaced by stackable chairs and the church office next door was refurbished as foyer/reception area. This building had been bought by Stichting Volkskracht Historische Monumenten (a foundation for the preservation of listed historical buildings). The Foundation now owning the church could rent it back, after restoration, from Volkskracht. We now call this area ‘Klockhuys’ (church bell-house) because it is approximately where the former bell tower stood. The upstairs appartments in this building are currently rented out. At the same time a start was made consolidating the roof, gutters and roan pipes. The following year the high parts of the main part of the church, the cracks in the walls and plastering, and the leaded windows, and the furniture were tackled. Conveniences such as floor heating and more/new toilets, needed to be able to rent out the church to other groups than the congregation, were also installed. 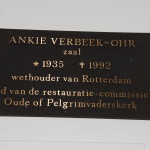 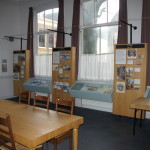 In 1994 the Eben-Haëzer hall was refurbished. This hall contains the Ankie Verbeek-Ohr Room, named after the late alderman Mrs Ankie Verbeek-Ohr, which hosts the permanent exhibition concerning the history of the Pilgrim Fathers. This part of the building was revamped in 2009. In 2009-2010 the Study Room was given a make-over, now a room for meetings, lectures, etc. will all modern multi-media facilities.
In 1998 the church was re-opened for use with many festivities. At that time only the Bätz-Witte organ still awaited restoration.